Our scripture reading for today is a glorious hymn to the awesomeness and primacy of Jesus for us. It speaks in epic, cosmic terms about how Jesus – well, actually, more accurately ‘the Christ’ – is the glue that holds everything together. I say ‘the Christ’ because it points more to the ongoing, living presence of Jesus rather than the fleshy 30ish years he walked around with folks. Anyway, it says the Christ is the visible image of the invisible God. The Christ has existed before anything else, and he holds all creation together. And when it comes to the church, ‘the Christ’ organizes and holds it together, like a head does a body.

In the Message bible, Colossians 1:18-20 reads, The Christ was supreme in the beginning and—leading the resurrection parade – is supreme in the end. From beginning to end (the Christ) is there, towering far above everything, everyone. So spacious is (the Christ) (I love that image!), so expansive, that everything of God finds its proper place in (them) without crowding. Not only that, but all the broken and dislocated pieces of the universe—people and things, animals and atoms—get properly fixed and fit together in vibrant harmonies through the Christ.

It’s a glorious hymn to Christ’s majesty and wonderfulness. And, it also acknowledges that there are broken and dislocated pieces in the universe – but in and through the Christ there is healing and harmony.

Interestingly, just before all that praise, there’s a prayer – because Paul, who wrote Colossians, was smart enough to know that while hymns of glory are great and all, the real, lived experience of Christ’s followers is not all sunshine and unicorns. Sometimes (often?) life has broken and dislocated parts. Specifically, there are two words in this prayer that just hit me between the eyes when I read them.

Colossians 1:11-12 – We pray that you will be strengthened with all God’s glorious power so you will have all the endurance and patience you need. May you be filled with joy, always thanking God. God has enabled you to share in the inheritance that belongs to God’s people, who live in the light.

A prayer for endurance and patience so that God’s people can live in the light. Can I get an amen?! That is a prayer for all time – and especially for times like these!

[sigh] Brokenness and dislocation requiring endurance and patience are not exactly what I was hoping to find in the scriptures on my first day back after a long and peaceful time apart. I was hoping for something gentler. Oh well. These are the times we live in – and, as I certainly don’t need to remind you, there’s much about these times that is tough to bear.

I suppose one of the purposes of ministers having sabbaticals is to refresh and regroup so we can tackle exactly these things together. A sabbatical is a sacred time apart. A season of holy rest. It was a very good, very needed, season for me. Would I have liked it to go on longer? Sure! Who wouldn’t?! But all seasons end in their time.

As you probably remember, I love the metaphorical, theological language of seasons. Seasons come and go, but they rarely adhere to their assigned dates on the calendar. If they did we wouldn’t be feeling the chill of winter until mid-December when it ‘officially’ starts! Next week marks the beginning of a new liturgical season called Advent, which is our preparation time before Christmas. But before the new season can come this current season needs to end. That’s today. Liturgically, today is called “Reign of Christ” Sunday, or sometimes “Christ the King” Sunday. Being the last Sunday of the liturgical year it most definitely represents an ending.

Next week we enter the story of anticipating Jesus’ birth. So you might think that this week we would be thinking about his death – which is part of today’s reading, but not the heart of it. But as church people we all know that Jesus’ death wasn’t the ending. Well, it was one kind of ending, and also a new beginning. A new season called Easter.

What happened after Jesus’ death? We speak of a resurrection – where Jesus is experienced as risen, and living, although not alive in the biological sense. We shift our language to thinking of him as ‘the Christ’ – the anointed – perhaps even ‘the king’ – but not a classic kind of king in a classic kind of kingdom. He is a new ‘king’ whose reign is not over land, or politics, or temporal things, but in the form of a state of mind, and being, and living, and loving that is centred in God’s lovingkindness.

The season called Pentecost celebrates what that Kingdom of God looks like, and it’s filled with stories about the formation and growing of the Church that the Spirit inspired. Today that season of Pentecost ends. But don’t think that means the Spirit ends, or dies. It just takes new forms and shapes in yet another new beginning, another new season.

Endings and beginnings are not some new innovation we need to discover. Endings and beginnings are the DNA of the Church. If you want to embrace the idea of a loving kingdom with Jesus as its head then you have to end, or let go of, your sense of kingdoms being about temporal power, and land, and laws, and whatnot. Dare I say, you have to ‘die’ to what was to embrace the new thing – the new Way – the new season? We even have a wonderfully fancy theological word for all this – resurrection.

If we can let go of (if we can ‘die’ to) our strict association of resurrection with the physical crucifixion of Jesus two thousand years ago, and embrace the powerful concept of resurrection as letting go of the former season in order to embrace a new season, well, we will have a much deeper sense of what Jesus was actually talking about all the time. Dying and rising. Endings and beginnings. Changing seasons. That is Christianity. Always has been – always will be.

And much like that uncomfortable chill you’ve been feeling in your bones this week as wintery weather has blustered in and put the end to our unseasonably warm autumn – the church season-change we find ourselves in the midst of is uncomfortable and chilling too. No, I don’t mean going from the season of Pentecost to Advent. I mean going from a season where all of the ways we knew about and did church were working great, and then the world went through a pandemic that seemingly changed everything.

So let’s name it. The elephant in the room – or not in the room, as the case may be. Three years ago, back in ‘the before-times’, on the last Sunday before Advent, I would have been standing in front of around 150 people in this place. Today there are around 50 people here.

“Yikes! Sound the alarms! Our church is dying!!!”

Deep breath. Let me assure you – that simply is not true. We are not dying. In fact, we’re doing remarkably well! Comparatively speaking, this congregation has come through this [beat] ‘unprecedented’ season very strongly. We are people of faith, so it should be easy for us to remember that we trust in what we cannot see.

What you 50 here in the sanctuary can’t see – and what each of you individually watching online can’t see – is one another. Our average number of views for our weekly worship service on YouTube is around 130-150, and sometimes goes to 200 or more. If you add those views to the folks worshipping in-person we are actually reaching more people with our Sunday worship than we did when we were all here in one place. That’s awesome! The key, critical difference is that we can’t see one another – so it feels different. 150 people in one space together creates a certain amount of amazing energy. Reaching 200 people, or 300 people total, connects more people together, but it doesn’t feel that way.

Oh, make no mistake, we’re doing great, but we have a ton of work to do. It’s really, incredibly hard to make deep connections among one another when we’re not in the same physical space. But for the foreseeable future, friends, this is our reality. A hybrid, both/and congregation. Here’s a wild thought for you. By numbers, our larger congregation is online rather than in-person. And the cold, hard reality is that our worldwide culture has shifted, and the good-old-way-it-used-to-be is not coming back.

Consider this: Everything that we might now be lamenting, or grieving, because it can’t be like it was – all those ‘ways we loved to do things’ – they were all innovations once. Our favourite things were once the great, new thing – the new season – that something prior had to make way for. Then we got used to them over time, and they felt like the way we’d ‘always’ done things. A great song lyric says it this way: Every new beginning comes from some other beginning’s end. [by a group called ‘Semisonic’]

But don’t despair. Fear not! Do you know how many time the words “Fear not!” appear in the bible? 365. That’s one ‘Fear Not’ for every day of the year! And the reason we keep needing to hear “Fear not” is because the world has a frustratingly annoying habit of suddenly changing and shifting right beneath our feet – throwing us into chaos. Right now we’ve been thrust into a new reality. Covid has changed (and is still changing) our world. A new season was forced upon us. We didn’t choose it – but there it was. And we’ve done remarkably well as a congregation navigating it. I pray you know that! Your faithfulness, and passion for the ministry we all share, is inspiring!

Covid isn’t over, and we don’t know yet what the future holds. All we can do is trust in our resurrection DNA – the stuff that assures us that there’s a sacred pattern: certain ways of being, and doing things, come to a conclusion, and new ways emerge.

So…fear not! I pray that you will be strengthened with all God’s glorious power so you will have all the endurance and patience you need. May you be filled with joy, always thanking God. God has enabled you to share in the inheritance that belongs to God’s people, who live in the light.

Seasons change – but God’s love never changes. Our joy penetrates through all the turmoil, as we journey together, striving to live in love’s light. Love never ends.

Having affirmed that truth, I’ve come back to work on a Sunday that is focused on an ‘ending’. Next week, in Advent, we begin anew. Dying and rising. Ending and beginning. A new season. 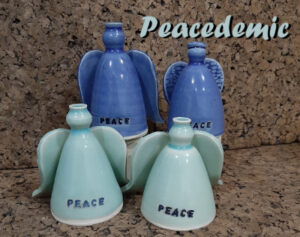 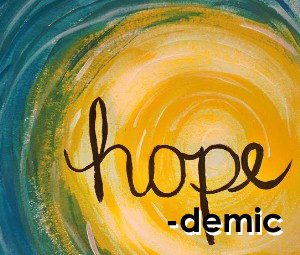 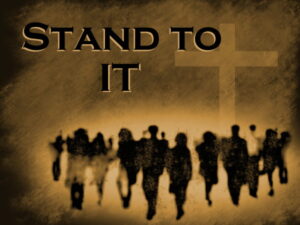